In one of those odd twists of history that are not uncommon in museums, the Museum of Science, Boston displays a period room.  The former game room of Colonel Francis Thompson Colby boasts an impressive collection of trophies from four decades of big game hunting, and souvenirs of his travels on at least four continents.  We are in the process of installing a new vestibule, so visitors can actually enter the room, and in the process have uncovered a little surprise.

The room is fronted by a pair of “elephant doors”, a not-uncommon sight in East African buildings. These doors are said to have come from the palace of the Sultan of Witu.   The 12-foot high, four-inch thick doors are studded with brass bosses which are supposed to deter elephants from butting the doors in with their heads. When the doors were taken down to be rehung, we noticed a small inscription carved at the top of the central pillar, which had been in the shadows for decades.  Here is the inscription:

And here are the transcriptions: 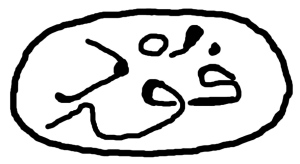 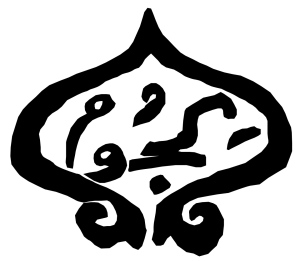 Any Arabic scholars out there?

For the curious, Witu is a village in eastern Kenya, north of Mombasa, not far from the port of Lamu. It was formerly an independent sultanate in the late 19th century, and was a British protectorate from 1893 to 1923.  Judging from the Lion and Unicorn above the door, I’d say the doors also date to somewhere between 1893-1923.

Lori Phillips (follow her: @HstryQT) kindly spread the word amongst the Wikipedians, and got one response already:

Find me now on Mastodon