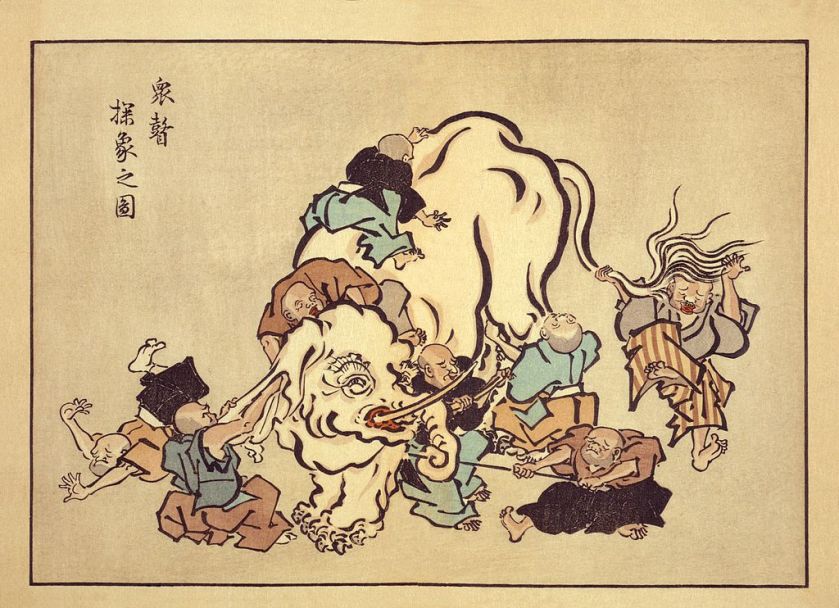 I’ve been thinking a lot about transformation since writing about the Museum Full Stack. It’s been a deep rabbit hole and promises to get deeper, since it is so foundational. There have been some interesting reports on organizational change, Janet Carding’s new CODE|WORDS essay on managing change, and essays on the difference between transformation and change. And the steady drumbeat of newspaper articles and opinion pieces on technology in museums. Good times…

Like the allegory of the blind men and the elephant, we’re groping after something big, complicated, and unknown, feeling our way around something we can’t yet articulate succinctly. Secondly, it’s a non-technical title because what I’m calling “digital” transformation is, at it’s most fundamental level, not about digital technologies, but about people, mindsets, relationships, and things. I believe that transforming our processes will deliver transformed products more effectively than the brute force method of bleeding all over a bleeding edge product in a traditionally organized institution. Delivering innovative (and even revolutionary) experiences is a lot easier to do from a position of knowing what you are (and aren’t) about.

Koven Smith, in his awesome, infamous “What’s the point of museum websites?” speech from Ignite Smithsonian, compared museum websites to Conestoga wagons, in that each were well-suited to doing their appointed task, but that times had changed and new vehicles were needed. Continuing to build the best Conestoga wagons we could isn’t going to get us there. If you insert “museum” for “museum website”, the analogy still applies. The vehicles we need are museums that have transformed both their people and processes to make use of (not bow down to, or slavishly adopt) digital technologies in every aspect of our work.

The following posts lay out some of my thinking on the subject and should give you a very clear idea of where I stand in late-2015. Hopefully, it will also spur you to share your insights, because that’s one of the ways we get there; by being more transparent in our thinking and exposing the underlying structures of our strategies, frameworks, and processes. Go check out the CMOA’s Innovation Studio if you need an example of what that looks like.

What is digital transformation?

I consider myself blessed to be working in museums during this weird transformational period when museums are starting to change from being pre-digital museums to post-digital museums. It’s a wild ride! It’s also frustrating as hell sometimes. It’s practically a museum rite of passage in some circles; expressing your frustration at your own museums’ lack of progress in digital endeavors, and I’ve can relate to that frustration. It can be hard to see the potential and watch your colleagues taking pioneering, sometimes faltering steps to enter and colonize this strange new realm. These pioneers have now been joined by a host of other museums who have made commitments to digital experimentation and exploration. You can find robots in fashion exhibitions at the Met, and innovative devices like the Pen at the Smithsonian. But as Elaine Gurian laid out in her 2010 paper, “Wanting to Be Third on Your Block”, there is value in not being on the bleeding edge, too. You get to benefit from the pioneers’ and their followers’ knowledge, and learn from their missteps. Being third also makes it easier to skip the “gazing at shiny objects” phase of fascination with new technologies that often result in cultural commentators taking museums to task. This Lee Rosenbaum piece is one of the more balanced examples of the genre.

While there are many innovators out there, there’s still plenty of work to be done to thoughtfully tackle the big issue of digital transformation – how to become what Ross Parry calls a “postdigital museum”, one that has normalized and internalized digital technologies to an extent that they permeate the whole institution and how the institution works. Electricity is critical to our operations, but nobody talks about it anymore. My goal is for us to feel the same way about “digital”.

Digital transformation and the post-digital museum

There are currently two schools of thought regarding the merits and pitfalls of having “digital” be a separate entity, given its own departments, heads, and strategy documents. John Stack, formerly at the Tate and now at Science Museum, London is probably the best-known of this group. His Tate Strategy papers, like “Digital as a Dimension of Everything” have been profoundly influential. Others like Ross Parry of UCL have studied the effects of digital adaptation on museums. His paper “The End of the Beginning: Normativity in the Postdigital Museum” (paywall, bleah…) is an instant classic.

On the other hand, there are the people I think of as the Realpolitik group, who argue that as lovely as the vision of being a post-digital museum is, most of us don’t have the resources and wherewithal of the Tate. We just ain’t there yet, and need “digital” as an intermediate step until we reach the promised land and don’t need “digital” people any more. Chad Weinard’s “Digital Strategy, Museum Strategy: On needing both, for now” is probably the most succinct statement of this view. Most of the field falls somewhere in between. The field is full of Chief Digital Officers, Directors of Digital Adaptation, CIOs, CTOs, CXOs, and other change agents who have the unenviable task of trying to remake their museums and deliver transformation. And change is hard.

An illustrative story: When I was a young exhibit developer I had the privilege of having Judy Rand as my first real editor, and one of those mentors who shaped me as a professional. There are few people who have been as profoundly influential in the field of writing for museum audiences as Judy. It’s probably just as well I didn’t know that when Judy was hired to guide us through the process of developing a major international exhibition on Leonardo da Vinci. As part of that process, Judy taught me a great deal about writing in general, and label writing in particular, but the lesson that has been the most useful to me was one about the importance of establishing shared vision of the big idea of the show. She was relentless about making us be clear about what we trying to say, and any time someone would come up with vague, weasely wording that the team could agree on, she’d smack it down hard and make us go back and try again until we had come together enough to embrace a real shared vision, not just an acceptable compromise.

When we’d complain that this was painful (and complain we did), she’d say, “You can have your pain now, or you can have it later, but you can’t not have it. And the longer you put off having that pain, the worse it will be.” And over the succeeding twenty years, I’ve lived out both of those scenarios enough times to know the truth of her words. True transformation is hard, but I am convinced the alternative is worse. Marcia Tucker, the New Museum’s founding director said, “Doing things differently involves a high degree of discomfort, which is why most of us prefer not to.”

Give me discomfort now, rather than despair later.

Next up: what have we learned about digital transformation thus far…