After the handwringing in my last post, I thought I’d instead get aspirational, and look towards the bright side of life when it comes to museums, visitors and photography. If you still need/want more seflies, I’d suggest you look at the Wellcome Collection blog. Alli Burness does an excellent job of contextualizing selfies in a post called A to Z of the Human Condition: I is for Indivduality, that tries to shove some theoretical underpinnings beneath the mass of conflicting opinions. I already reflagged it, but if you missed it, go back and read. For those interested in more reasoned approaches to looking at the act of visitor photography, I’d recommend you read it, and check out the references, especially Goffman and Crossley. I’d add Susan Stewart to the mix as well.

So to get off the seflie kick, I thought I’d highlight other kinds of visitor photography present and potential, and look at ways visitors could use cameras in museums that might generally be held to be valuable and further visitor learning. One is current, one is potential, and one is just an idea I’ve been kicking around. I’d love to know what you think of them.

#emptymet, or the museum as canvas and subject

If you are at all interested in museums and social media then you’ve probably witnessed Instagram’s phenomenal rise in popularity in the past couple of years. Instagram has in the last year passed that inflection point from niche platform to juggernaut, and the number of museums getting on and getting active on Instagram bears witness to that. Seeing what kinds of pictures visitors are taking in your museum and being able to engage them via Instagram is a great social media opportunity. Lots of museums have also used the platform as a way to share images from their collections as a way to raise awareness and build an audience.

All well and good, but the model is still pretty old-school and broadcast. A different engagement strategy, and one, like #svegliamuseo, which originated outside of museums is the phenomenon that encourages visitors to use the museum itself as the canvas for their creative expression.

Simple social photo sharing is increasingly popular with many age groups and is overtaking text-based sharing in popularity, as evidenced by the dawn of the Age of the Selfie. We know people love to take pictures in museums, and that causes problems in big museums with big attendance. Dave Krugman, a New York Instragrammer (@davekrugman) had another idea. Why not encourage good photographers to take great pictures and share them via Instagram? Thus was born #emptymet.

Krugman convinced the Metropolitan Museum of Art to reach out to prominent Instagrammers (influencers in social media speak) and invite them to come and shoot at the Met some time when the museum was empty, so they could have unfettered access to the galleries and objects. All the pictures they took of the museum would be hashtagged #emptymet. And so, one day this past Spring, seven IGers wandered around the Met for ninety minutes before opening, and a phenomenon was born. This article in the New York Times provides all the details you could want.

The images they posted to their legions of followers (think hundreds of thousands) spread the museum’s image far and wide in a way paid advertising could never do. Look at the pictures from #emptymet and you’ll immediately see that they’re not the usual mugging in front of the objects. They’re good, or great or absolutely gorgeous, professional-quality images of the institution taken from interesting perspectives. Even the selfies (which are rare) are well composed and appealing to look at. For the cost of letting in seven Instragrammers before opening, the Met got a thousand images seen by hundred of thousands of followers of these photographers. And those people got a clear message that the Met is a beautiful place full of interesting sights. Granted, it’s a privileged view that the general public by and large won’t be able to partake of, but it’s still a kind of access that museum visitors are always hungry for – the behind the curtain view.

The model is spreading rapidly. #emptymfa just happened in Boston, and #emptypem has been in the works for some time. Look for it in January.

Label Whisperer, or rethinking the tombstone 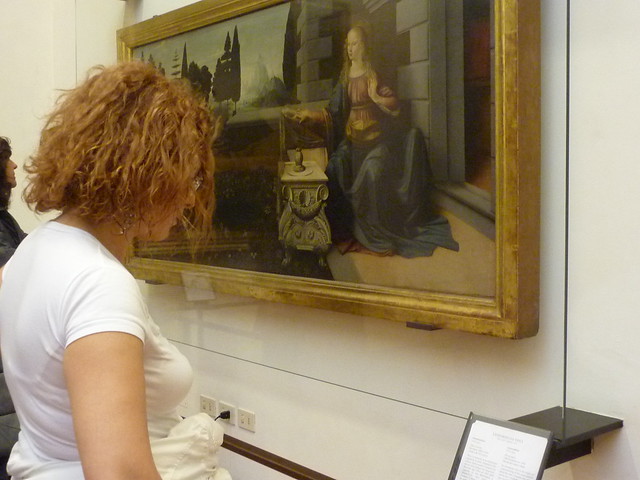 I realize that the Cooper Hewitt’s Pen is getting all the attention these days and probably will for the foreseeable future, but an example of the kind of groundbreaking thinking Cooper Hewitt Labs does is neatly embodied in a project they unveiled earlier in the year, called the Label Whisperer. They started from the premise that often visitors take pictures of labels to remember information about an object. What if they could transform that simple act into a way to query Cooper Hewitt’s collections management system and deliver all the information associated with that object? So they built a system that does just that. When I first read it, I smacked my head and said, “Wow!”, and went back and reread it to get through the technical bits. It is very technical, and also very worth reading even if you’re a non-technical sort, because of the breadth of vision it possesses.

Simply put, the Label Whisperer, was a collection of software bits that they wrote and glued together to allow a visitor to take a picture of an object label and get back the collections record for that object. Click, submit, and read the result. From a web browser. Without downloading a QR code reader, or installing a .3 Gigabyte app. This is genius stuff that goes from encompassing physical label design, to deploying optical character recognition (OCR) on photos of labels looking for accession numbers, back-end magic to conjure up the object record associated with that number, and then delivering a web page with that accession number’s record. I like the way it starts from an observable visitor behavior, and then devises a way to both leverage that activity, and deepen it. It’s done fast, done with existing products where possible, and the results are made available on GitHub for others to build on. That’s how you innovate and bring the whole field along with you.

Not only is it a great example of systems thinking, but it also lays to rest one of my pet peeves, the amount of physical label space used on accession numbers, given the percentage of museum visitors who will ever care. With the Label Whisperer, the accession number actually gets to fulfill it’s purpose, for a public audience!

Be still my ex-registrar’s heart!

From snapshots to scaffolds

At the Documentation workshop I went to earlier this year, there was a ton of talk about ways to help parents and caregivers scaffold their children’s learning. Documentation is a pillar of the Reggio Emilia model of teaching, and something I’ve been interested in for years. But finding applications for Reggio-inspired approached to my daily work is sometimes hard to do, especially when designing for multigenerational audiences. I wrote about this a few weeks ago, if you want more.

A little bit on documentation

Now hold that thought in mind, and shift gears for a second to think about some common tropes about families in museums. Oftentimes, parents will take children to a museum ostensibly for the children’s benefit, not their own edification. They will also tend to document their family activities, particularly the exploits of their children, especially if they’re being cute. What if that activity were tweaked slightly to focus on the learning taking place? The cuteness would most likely remain, the memorialization of the event would still be present, but if the photographs were documents of a learning experience could we construct some kind of experience that parents and caregivers could use to situate those photos within that would facilitate discussion?Is this some kind of app, or a simple webpage with instructions about how to act more like a Reggio educator? I don’t know, but it *might* be possible.

And if you still need more:

How Not to Be a Jerk With Your Stupid Smartphone
Evan Selinger, The Atlantic

Selinger does a nice job of discussing the disconnect between etiquette and new technology. Given our still-analogue mindsets about photography, it might be time to revise our rules for visitor photography in museums.

Alone in the Virtual Museum
Alexandra Schwartz, The New Yorker

Schwartz takes a long tour through virtual interaction with museums and pokes lots of holes in old canards about technology and museums along the way.

Here’s What Happens When You Let the Internet Curate an Art Museum
Graeme McMillan, Wired

The answer is, “You get an exhibition with an audience that’s already interested in it.” The Frye Museum is on their third (yes, third) crowdsourced exhibition, and the place hasn’t imploded or turned into a free-for-all.

Just to be contrarian, I’ll throw in this piece that proposes the thing we need to question is not photography, but the way we think of museum objects.  It’s based around work by art historian Alexander Nagel, but also drags in Blake Gopnik to problematize the traditional veneration of the object. Go nuts.