Back in the beginning of 2014, Rob Stein, Suse Cairns, and I had a series of conversations about blogging, conference presentations, the future, and other things I’m forgetting. The outcome of those talks was an online publishing experiment we decided to call CODE | WORDS. Our dream was pretty straightforward. Could we improve on the models of online and offline discourse we all engaged in? Was there some better way to generate substantive discourse that was better than the blog model of long comment chains, and was faster and more collaborative than the traditional “go sit down in silence and write your article” model of publishing?

You can go to Medium and read the results for yourself. We didn’t hit all our goals, but we did help give birth to thought-provoking essays that might not have been written otherwise. It’s some of the work I’m most proud of in my career. And, as a bonus, one of our hopes – that working in the open would provide greater benefit to the field than other methods – has borne fruit. 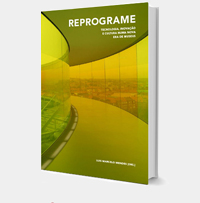 Luis Mendes, one of the core CODE | WORDS conspirators and one of the most consistent cheerleaders during the long slog to get the essays published, has been busy in his native Brazil to collect and publish new thinking about museums. To that end, he started a program called Reprogram, which aims to investigate “the changes in museums around the world from a collection of essays, articles and lectures transcripts of some of the most influential museum thinkers of our time. It is a collaborative effort of shared content and publishing made possible by crowdfunding.” He crowdfunded the publication of the first volume of the series, Communication, branding and culture in a new era of museums, available in Portuguese and English, and used many of the CODE | WORDS essays in the second volume, Technology, innovation and culture in a new era of museums. It’s quite humbling to share the contents page with people like Cory Doctorow, Nina Simon, Jane Finnis, Koven Smith, and other great practitioners. Both PDFs are worth the download. 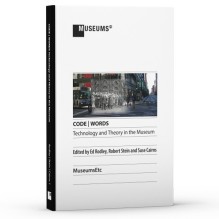 While Luis was busy in Brazil, we approached publishers with CODE | WORDS and found in MuseumsEtc a kindred spirit in Graeme Farnell. Despite the questions, concerns, and requirements we threw at him, he never ceased to be an enthusiastic partner. The result is a Creative Commons licensed book, that contains the original essays, with some revised essays, a forward by Seb Chan, and more! I was glad for the chance to rewrite my essay, which I felt never quite got where I wanted it to go. That’s a bonus benefit of the physical book, and speaking of benefits, we will soon have a special ordering link that will send part of the proceeds of book purchases to the Museum Computer Network Scholarship fund. How cool is that? When I get the URL, I’ll post the link!

And there’s more CODE | WORDS news coming, but that’ll have to be a post of its own.